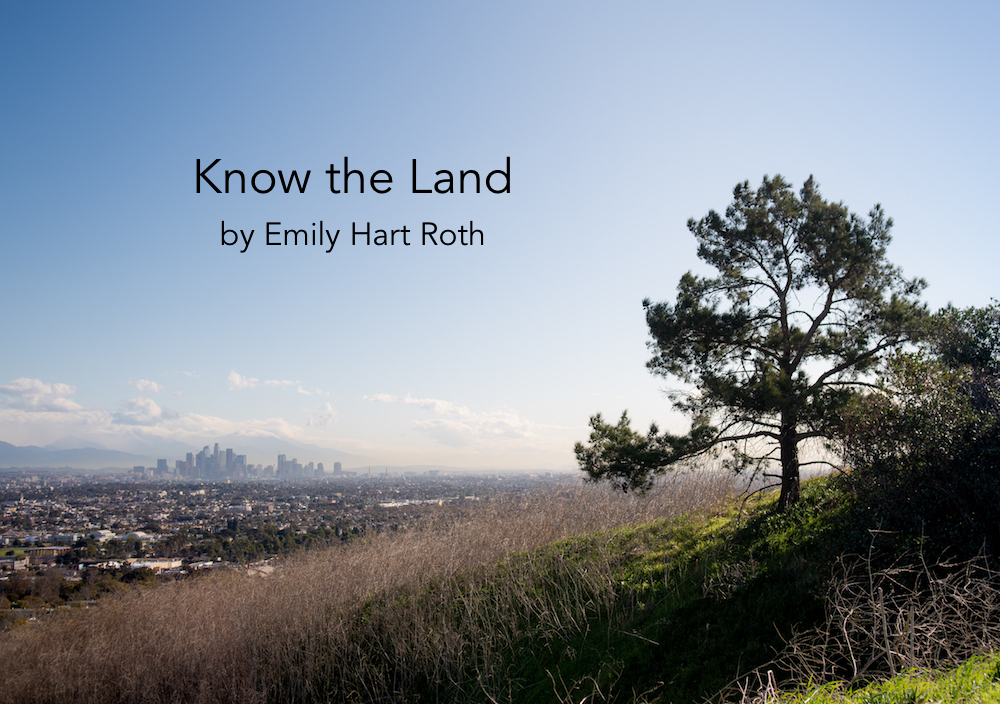 Living in the city of Los Angeles for the past fourteen years, I always focused on ways I could get out and up to the mountains, out into nature. Nature was always "out there," something I had to go to, drive to. I also traveled back to the woods of Wisconsin, where I grew up, two to three times a year in order to feel connected and grounded. In the woods of my childhood home I received a sense of being "filled up," and after every visit I hoped that feeling would last until the next time.

Then three years ago I became sick. I was raising two young children with a life of travel, following my husband from film set to film set across the country. My body screamed for attention, and so, I paid attention. Although my mind said one thing͢—“Keep going, follow your husband on far off jobs, keep the family together, explore new places”—my body said something else—“No, it’s too much for you right now, rest.” But I didn’t remember how to do that, so I asked for help. First, I turned to doctors, therapists, friends, and family. But I also turned inward, curious about my long-time need to escape to the natural world. I wondered if a less sporadic and more constant relationship with the natural world could be part of the healing process.
***
My journey began with discovering Nature Kids, an outdoor preschool founded on the philosophy that kids were meant to be in nature. There, I started the conversation with fellow parents about the need for children to connect with the natural world. Then, I worked passionately for a non-profit called EverWildLA, a nature immersion program for home-schooled children ages five to twelve. Both LA Nature Kids and EverWildLA opened my eyes to exploring the land in and around Los Angeles more intimately and helped me foster a relationship with the community, the plants, rocks, water, and trees around us.
‍

‍
The feeling that I was on the right path grew. Through my relationship to the land here in Southern California I saw and remembered my true nature. In the late fall of 2017, I went on a forest therapy walk and communicated more deeply with the non-human world than I can ever remember doing as an adult. My body was healing. I noticed that the stronger my relationship was with the land in my home of Los Angeles, the stronger my body became. I trusted my body again, and that trust allowed me to listen to my body’s relationship to the natural world.
‍
Searching for a way to maintain this relationship and make the natural world part of my daily practice, I embarked on my journey to become a forest therapy guide. Part of the certification practicum requires that we spend two to three times a week sitting in the same spot, simply noticing. This practice led me to develop a relationship with a pine tree in the Baldwin Hills of Los Angeles. Some days when I visited the tree nothing arose. Other times I felt flooded with emotions.

The tears came quickly, almost before I even touched the rough bark, sticky from the pine sap dripping out of its trunk. I sat with my back resting on the trunk of this beautiful middle-aged pine standing alone on a hill, surrounded by a sea of succulents, overlooking the vast city of Los Angeles. The tree kept watch like a guardian of the city. The tree held and supported me.
‍

If you grew up in the arboreal forests on Lake Superior like I did, it’s likely you began at a very early age protecting the lake. The great “They” were always pushing for new mines and promising jobs for poor small towns. That early spring night in the far north of Wisconsin, when the earth still looked like winter but the calendar said it’s spring, we were gathered in the Environmental College gymnasium. Indigenous leaders like Walt Bressette and Winona LeDuke alongside local and state politicians were gathered to defend the land against the most recent proposal to bury radioactive waste outside our town.

My siblings and I squeezed together on the bleachers along with friends and strangers who we knew to be on our side. There was drumming and a panel of speakers. We sat clutching our jackets with hats and gloves stuffed into the arms so as not to lose them. Our boots squeaked in the melted snow puddling at our feet. Then my mom and her group lifted their voices in song. A hush fell over the crowd. “Our life flows on in endless song, above this lamination, we have the strength to save the world from sheer annihilation. We will not give, this sacred ground, to hide the death you’re bringing, our hopes and dreams dwell in this land, how can I keep from singing.” We all joined in, for the chorus, our voices raised in unison.
‍

Twenty-five plus years later, I stood on land I was still getting to know. The pine tree listened to my words without judging and gave comfort as I leaned into its strong limbs. I talked on and off for over five minutes, holding nothing back, letting the raw vulnerability roll off my tongue. Then I listened. I listened to what the tree had been going through.

I wanted to reciprocate and say thank you to the tree for holding space for me, for sharing strength. The song rose in me, “How Can I Keep from Singing.” Overlooking the great city of Los Angeles backdropped by the distant smog-hidden San Gabriel Mountains and oil wells pumping 24 hours a day, I belted out the song—I sang the modified version, rewritten by my mom and her singing group ages ago. My voice grew in strength and power to let this tree know, to let this land know, I heard their voices and I was here for them. The same way I had let my body know I heard its cry for healing and I was there to answer the call by bringing it home to nature.

Emily Hart Roth is a storyteller and on the path to becoming a forest therapy guide. She grew up in the north woods of Wisconsin and now splits her time between Los Angeles and the shores of Lake Superior. As a photographer, Emily’s clients include non-profits, food/restaurant and fashion stories. She self-published a book titled Art; a lifestyle. Emily shares her passion for nature medicine with her community, husband, two daughters, and Harold the dog. You can follow Emily @emilyhartroth and her photography.

Our Mission: Nurture heart-centered relationships between all peoples and the More-Than-Human world of nature.